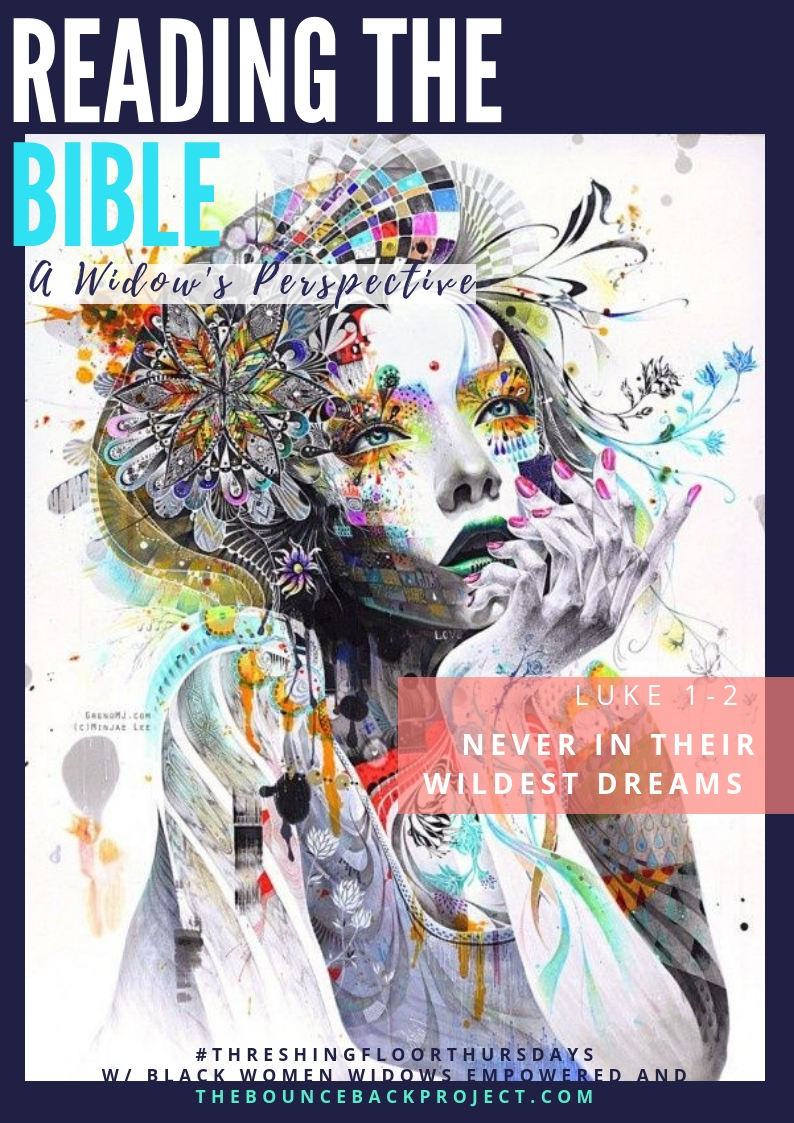 This week I started Luke. I’ve always liked that name, so when I saw that the next “recommended book to read after John” were Mathew, Luke and Mark – I picked Luke. Cover Art Painting: The Amazing Minjae Lee.

The chapter starts off with the births of both John and Jesus, and how Elizabeth and Mary (their mothers, respectively) were cousins. Something interesting about them that I picked up on, was that neither of these women were “supposed” to be pregnant. Elizabeth was very old, and told she was barren. Mary was a virgin that was only engaged, not yet married to her fiance Joseph. It’s interesting to me because it seems like God likes to be “unpredictable”. In Elizabeth’s case, she was old – and had ‘lived her life’, and probably wished for younger days and babies along those long years. Even though Elizabeth was said to be filled with the holy spirit, and a good woman, she was still barren. Back in those days, infertility was seen as a bad omen, or being unfavorable to God. Shame was attached to infertility, and she lived most of her life with that shame. She probably thought her l ife was almost over, and that there would be nothing “new” or exciting to look forward to, because the things she really wanted were no longer possible. Never in her wildest dreams had she even considered that she might become pregnant and raise a brand new baby at this age!

In Mary’s case she was probably pretty young and had no idea what being married would be like. She might have daydreamed and pictured her life as a wife, an the “duties” of creating eventual children, but it’s doubtful she imagined immaculate conception – and having to explain that to her friends and family! What a crazy impossible shock that must have been to her life – being chosen to mother the son of God! And what about the rest of the situation? How strange things might be between her and her husband after breaking the news, or not knowing how that dynamic was going to play out with Joe not being her child’s biological father, and how that might make him feel for the rest of Jesus’ life. How would Joseph feel when his son walked the earth talking about his father – and never mentioning the man in the shadows that raised him?  It must have seemed incredibly impossible, the whole idea of it all. Not in her wildest dreams was this even a “thing”.

Bringing this back to me, and my perspective as a widow, its pretty obvious that no one would ever even think of their spouse passing away – especially not the way mine did. I’ve heard so many stories of how crazy, unexpected, downright impossible things have happened to claim the lives of spouses, young and old, healthy or not. But the kicker here is that I thought my surprise was his death. While it was a HUGELY unexpected and life changing blow, that wasn't even the part that I would have never imagined. THAT part happened as a result of his passing. I never had any aspirations of being a speaker, inspirational leader, teacher, coach, or creator of anything like what I’m doing now. I never had any idea I’d be able to be sitting here, on my deck on a Thursday, writing – living the life I created around a passion that didn't exist until he passed!! I feel like I’m a completely different person after Jason passed. That woman didn't believe she could lead, teach, love again, inspire or be anything more than what she was. That woman didn't have the faith, the wisdom, the self confidence, the motivation, the trust in others, or the energy to pour into others and relish in stretching people’s imaginations to see their own potentials. Never in my wildest dreams did I think THIS would be my life. Not when I dreamed as a kid, not when I met him and knew he’d be my husband, and not at the altar when we’d said “forever”. I’d never imagined THIS.

I wonder if Elizabeth and Mary were changed souls as well, after such a turn happened in their lives. They sang songs of joy and worship, knowing that their God was real and He had made them special. He had changed their lives. And yes, Mary would have to witness Jesus die. And yes Elizabeth though blameless, had to live most of her life with the shame of thinking herself broken, people whispering behind her back that she was unable to perform the one thing she was “supposed” to provide. There was tragedy attached to His plan. But there was also joy, and life and amazing grace – beyond their wildest dreams.