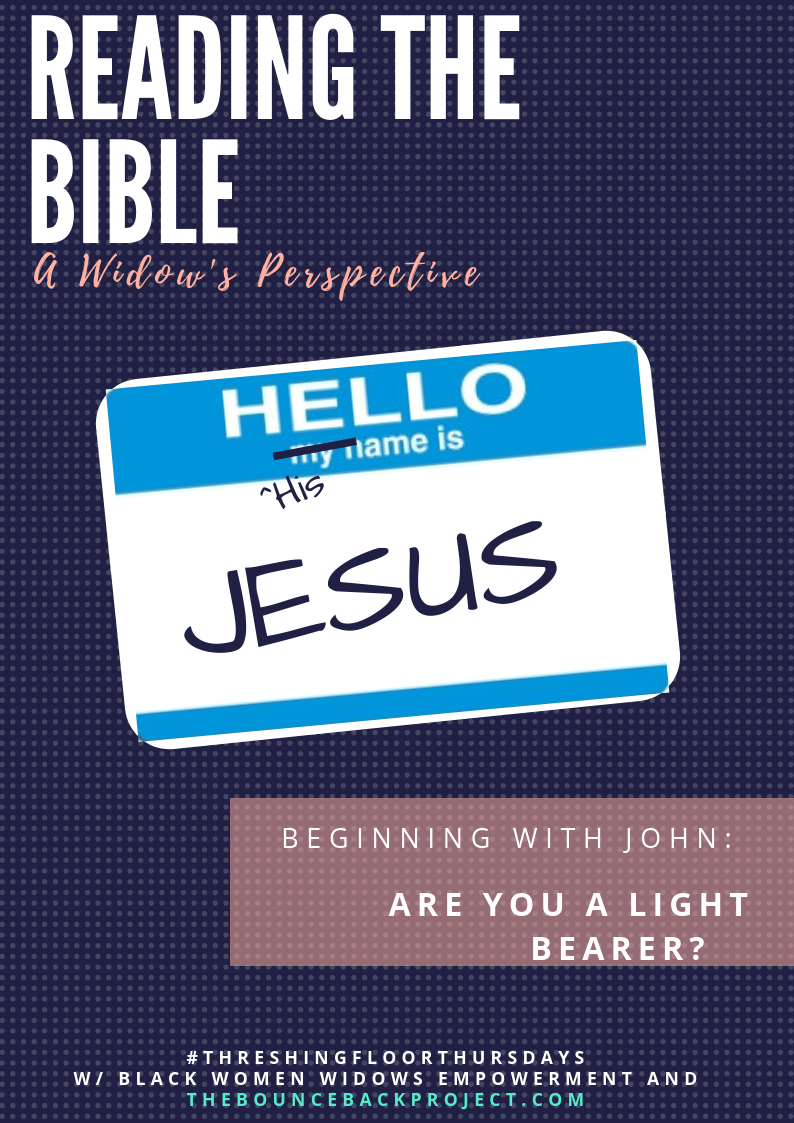 So I usually post earlier in the day, but the video of what I just spent my morning doing, (a rather valiant attempt at yoga while my 16 month old terrorized the room and I) will not be posted for various reasons. 😂. So now that she is tucked away and snoring, I finally have a chance to write what I got from the next bible chapter for my weekly Widow Bible Study, the 1st book of John. Please enjoy!

John was a tough read for me. I told you I’m no bible thumper, and it actually took me 3 translations, one sermon, and several “what is the message of ___” google attempts to really get what John has to do with ME. 🤔Because I know for a fact, that even though these stories have meaning in themselves, when we are led to read something, God usually has a reason for it. So I went on to my trusty devotional and that’s where the epiphany hit me. In the prologue of John’s testimony it talks of him not being the one true light, but coming to share his testimony of it (John 1:8). He talks of all the things God is, and how even though people know of the Word, this Word has now become a person. Talk about shock and awe! He’s saying these completely unbelievable things, wonderful things, kinda scary things – to people who didn't believe in God, and people who kinda believed but doubted.

Again – what does that have to do with me – as a widow? Well after the death of my husband and even recently, I have fallen in and out of the category of people who kinda believed but had some doubts. Which is interesting that I would (VERY) randomly decide to start with John in the first place. I really had no idea where to go after Ruth. So I picked a name from memory. “John” it is. Coincidence? I think not! My next epiphany came with the idea that John was like a prism. In the sermons of the book “Desiring God” by John Piper, he wrote “We are made to be prisms refracting the light of God’s glory into all of life”. A prism. A light bearer. I have felt that in widowhood, as well as in my life as a coach and mentor to other widows, I have had to be a light bearer. The devotional book says:

“To reflect the light of God’s presence in a dark and damaged world we have to stay close to the source: The Son. The more we let his light shine and reflect into the eyes of others, the more we become like Him.”

I have had to try to reflect God’s light when I wasn't even sure I believed it – for my children who lost their father, and at times believed they had no reason to love or want to know God at all. I have had to reflect the light for other widows who fell out of love with life itself, and did not see how they could go on without their spouses. I have had to find the light for myself – when in my darkest moments I felt cursed, discarded, and completely alone, like I was just doomed to sadness, never love, or ever feel normal again. Especially in those times, I’ve learned, it only takes a small beacon of light to drive out even the darkest darkness. John was only one person with this bold, crazy sounding testimony of the Word of God becoming a person, and all the amazing things that person was going to be. John was not the Christ, the Prophet, or anyone of very high stature. He was just a voice in the desert. Baptizing people with water. (John 1:20-26) Just one prism reflecting incredible, wonderful things to those who had lost their belief, or struggled with doubts and darkness, so that they could see the light too. That’s pretty amazing. And it gives me a really good feeling about my tiny, one-person beacon of light; and my journey responding to my calling as a light bearer, too.